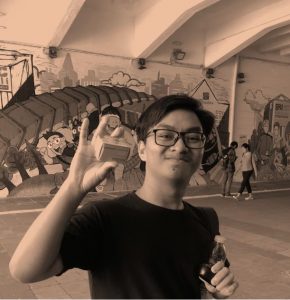 My name is
Muhammad Haidar Rais
you can call me Haidar, Im a :
UI/UX Designer,
Mobile Apps Developer,
Photography Enthusiast
and I’m always interested in
almost everything

Rolling Glory is a software house based on Bandung, been helping people for the digital needs since 2012. Helps people to build their own websites,mobile applications or games. And succesfully deliver amazing works to various companies such as Astra, Kalbe, Mitra Keluarga and a lot more.

In my school, we were taught not only to study and seek knowledge, but we were also taught not to be stingy in sharing our knowledge that we have. Armed with honed public speaking skills, we are ready to share our knowledges to the society

Me and two of my friends took part in a competition in the field of design organized by Gajah Mada University, the theme of the design in this competition was culture, and when I finished completing the design and the proposals we went on to the next stage which was to make a demo video and upload it to YouTube.

A competition held by ITS, me as the team leader and with two of my friends who being the UI designer and the coder, we worked pretty well and sucessfuly go through semifinals, the projects you can see on the projects menu the KokiBulan part

A photo competition held by Darut Tauhiid, i was won the first place at the side quest and get a free t shirt by the jury, but sadly i was’nt won anything at the real competition, but it was pretty fun The side quest was about taking photos with smartphones only and you can only do a minimum edits, and the picture on the left was the winner of the side quest

A short movie competition held by Darut tauhiid, we was making the short movie a week before the deadline and we name the movie ‘Iri dan Dengki ’ it wasnt that bad but were not won anything at that point, but its a incredible experience since i was the director of the movie,

A short movie competition held by Darut tauhiid, we was making the short movie a week before the deadline and it wasnt that great and were not won anything at that point, but its a incredible experience since i was the director of the movie, i learn a lot

When entering class 2 vocational high school, me and my friend registered to take part in the hackathon patrakomala held at Atlantic City Hotel, Bandung, when we got there we were invited to have breakfast together in the hotel lobby, and after eating we went to the rooftop hotel where it was where the competition was held, we listened to the opening and explanation from the
committee. there we were told to look for people to be interviewed about complaints from bandung, and from there we got the idea to make an application to report events that occurred in bandung, there we worked on the application until morning accompanied by food and live music. that was my first experience working on the application until I really felt tired, but in this hackathon we did not win and only got an award medal

A short movie competition held by Darut tauhiid, we was making the short movie a week before the deadline and it wasnt that great and were not won anything at that point, but its a incredible experience since i was the director of the movie, i learn a lot

This simple project is one of my favorite. I did it at my first year of my vocational highschool. the concept came up from one of my hobbies, its reading riddles story. I used too look it up at the internet and oftenly get spoiled because
the stories and the answer has no gap in it, so i can accidentally read it. In this project i solve the problem, so the reader could read without getting spoiled.

Another simple projects i did at my first year, this app looks really simple. But i did my research at the UX and implemented it, so user could use the app conveniently. While i worked on the basic mechanic on the app, i tried to look at the available similar apps on the play store and tried to use it while doing dzikir. And i ended up with conclusion that most of the available apps is not really practical at the usage, practically when people use it for count the dzikir, no one is actually look their phone all the time, and people use the counter so they know, do they have reached 33 or not. I solved it by giving vibrations when they reached 33, and they can swipe to choose another dzikir and reset the counts. So user didn’t need to look at their phone all the time and being practical at the daily usage

Another first year of vocational highschool projects i did, its a photo editor app using core image filter as the
editor, and its provide you various filter you can try with your photos

A projects that i did in my internship periods with the team. Its an apps that helps doctor to do an online health
consultation and also integrated with clinics so the doctor could easily give prescription for the specific patient that
they responsible with

Ping 8.8.8.8 is my first published filter on instagram and its pretty experimental and i did learn a lot from this one about the filter users market This filter provide you a animated face mask that compatible with multiple faces at once

Gas Mask is my second published filter on Instagram and this one is the one that brought me to learn a bit about 3D
modelling since the filter objects is 3D and i need to handle with it, but its pretty fun! .This filters purposes is to give a picture to the community when the air is being polluted very badly and you need to wear gas mask

Scouter is my third published filter and its thought me more about the 3D models This filters is pure my fun and experimental projects since its inspired from an anime called Dragonball where one of the charater used the gadget shown in the filter to measure other people strength.

This project is a project i did for a competition i joined with my team in MAGE ITS 5 2019 which successfully brought us to semifinal, ‘Kompor Akhir Bulan’ is a food recipe that oriented at what user have, which recipes are shown based on the available ingredients and tools that user have, and guided step by step. This app also shows a various reccomended recipe daily with various categories available, user could save the recipe with ‘Save’ feature so they could access it onine, users could contribute with their own recipe on ‘Community Recipe’ which will ber reviewed by other users, for top 10 recipes with the highest rating that posted within that week, it would enter the ‘Recipe Of The Week’ Categories..

This projects is my first UI/UX designer freelance project i took, in this project i joined with the team and did a negotiation between me-project manager-developer about the aesthetics, functionality and user friendliness
in a application design. This application is an application for a hajj and umrah tour travel company, The application will ease their system which they already built

Get My Portofolio Here

To apply for this job email your details to zwingfame@gmail.com